One of the questions we sometimes get asked, especially from enthusiastic people who are passionate about wood and react like they’ve just found a sweet shop that sells their favourite childhood sweets is, ‘Where did we come from?’ and ‘How long have we been around for?’

The second question is easy as we are currently busy planning our 10th anniversary celebration party meaning that our journey started back in October 2005.

As with any good story, there’s always a point in time where a defining moment, an act of sorts, starts the proverbial snow ball effect. So, like any great Hollywood epic, we start our story with a booming voice from the heavens – IN THE BEGINNING… 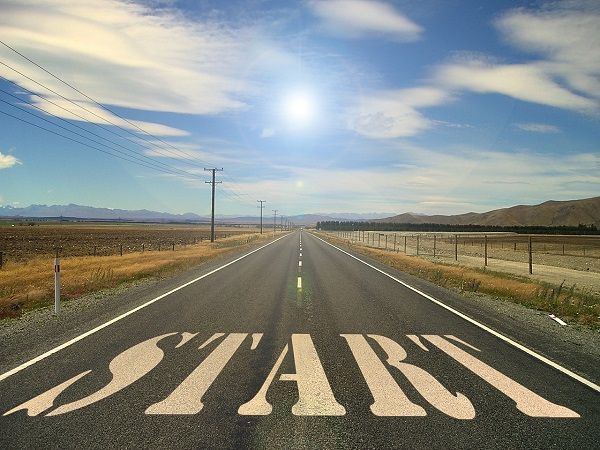 Well to be more specific 1989, a young man named Laurence Mann, that’s right, it’s not a typo, started work in a shop selling Traditional Furniture, which was also coincidentally called ‘Traditional Furniture’, (I see a pattern forming here) located in the small seaside town of Seabrook, on the South East Kent coast. It wasn’t long before Laurence became inspired by how old, sometimes tatty furniture, could be restored and transformed to be given a whole new lease of life. Furniture that might have otherwise landed up on the scrap heap was instead being snapped up almost as soon as the restoration was complete to take pride of place in someone’s home.

Laurence was so impressed with the skills of the trade (taught to him by the passionate Michael Hannant) and the beauty of the end result,, that he took it on himself to learn all the tricks of the trade, particularly with Pine furniture which was hugely fashionable in the 90’s. And let’s face it, there’s not many of us who or who’s parents didn’t own a ‘lovely’ piece of ‘orange’ pine furniture! 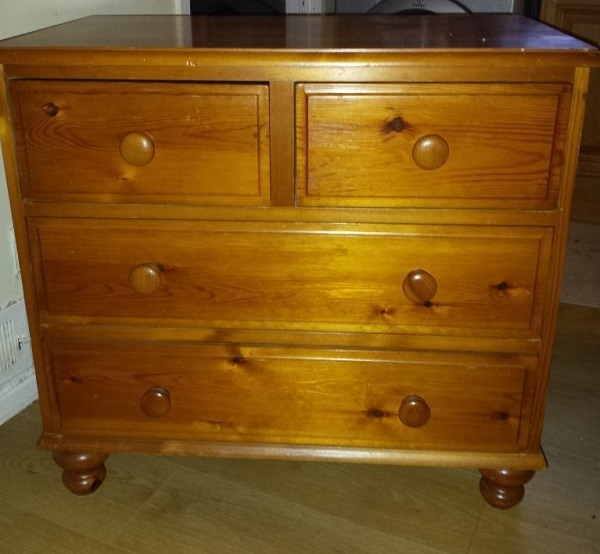 The most popular product in the 80’s and 90’s for finishing Pine furniture, that didn’t turn it a ghastly orange, was Briwax, a traditional wax that was available in clear and coloured variations. Today, Briwax remains a popular product with many in the trade because of its versatility, speedy drying time of just a few minutes and the quality of the final finish, perfect for commercial production lines. Briwax however has always contained toluene, is incredibly smelly and for many using it in confined spaces, caused headaches, watery eyes and in some cases dizziness and nausea. Having worked with and experienced the effects of traditional waxes. Laurence and Michael Hannant began to search for a purer, more user friendly alternative to Briwax and after a while managed to find exactly what he was looking for. 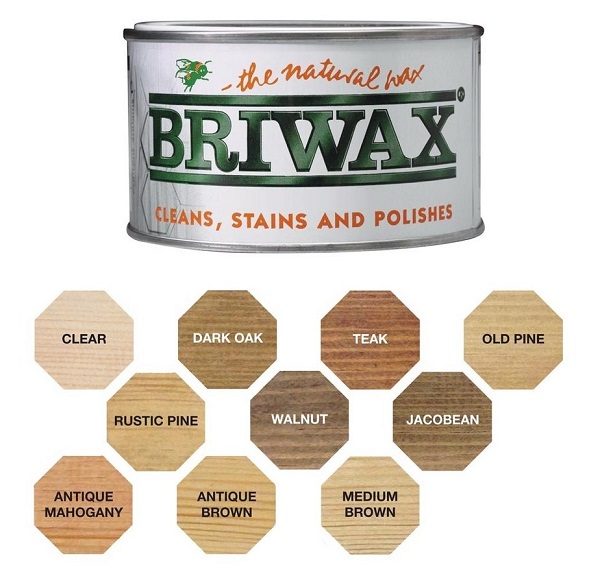 As the business thrived, Laurence become a partner with Mike Hannant who he describes as a ‘wood genius’. In their time working together, they experimented and improved the formula of the wax that they had found and began supplying pine shops under the name of ‘Traditional Furniture Wax’ via an aptly named publication – ‘Pine News’! Within their first year of becoming furniture wax suppliers, their client base had grown to around 400 shops and within 7 years, they were supplying around 2000 pine shops across the country with their own formula of wood and furniture waxes and other products.

In 2002 Laurence became a distributor for Ciranova products and by 2004 the ‘Pine’ bubble’ had burst and demand for pine furniture and therefore wood waxes was in sharp decline. A re-think was required and in 2005 Laurence went solo and began Wood Finishes Direct Ltd.

The change of company name meant that the business was no longer limited to selling just wood and furniture waxes and could offer a wider range of wood finishing products, mainly to trade, and the wider wood finishing industries. From very early on, Laurence decided that one of the most important aspects of the business was to provide not only the best products at great prices, but also expert advice on what to use, when, how and why. Laurence sought to learn everything he possibly could about each and every product that he supplied, not only which was best for what project, but also why. Laurence’s customer service and care skills learnt in the early days with ‘Traditional Furniture’ (later Hannants Traditional Furniture Wax) were equally as important in earning the reputation and respect for the new business. To this day, Wood Finishes Direct still focuses heavily on strong customer service values.

In September 2005, the new company moved to a 1,800 square foot, 16th century barn on scenic farm land near Sellindge just outside Ashford, Kent. The whole operation including warehouse, goods in, packaging, distribution, storage, manufacturing and office functions were carried out under one roof. Farmer John’s ever handy forklift was invaluable and those early cost effective days helped Wood Finishes Direct enormously to attract new business and a loyal following of regular customers. 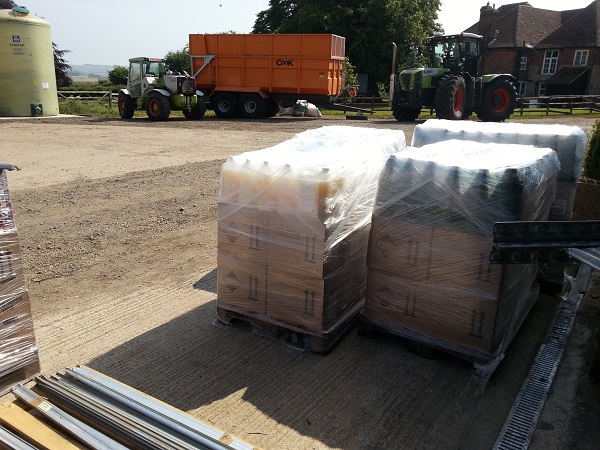 2007 was a key year for Wood Finishes Direct when Laurence partnered with long time friends James Burrows and Tim Hagger, both of whom brought their proven internet marketing knowledge and business skills to the company. The new found bond forged stronger relationships with suppliers which helped the company grow while James’ skills as a computer programmer, with speedy technical support and business know how from Tim meant that the first version of the website was up and running by May 2007. Within the first month of business, the new Wood Finishes Direct website had attracted around 172 online orders, a first for the new company which had until that time only operated offline. This gave a strong Indication of the potential that a business dedicated to the supply of wood finishing products had in the modern digital age.

2007 was also the year that the ‘MANNS Brand’ was born, with aspirations to create a brand that was as well known and recognisable as many of the already established wood care and finishing brands. ‘MANNS started out with just a couple of core products, namely a range of water based wood stains and waxes. Today, the range contains over 50 products, including waxes, wood varnish, wood stains & dyes, oils, primers and an array of application equipment. 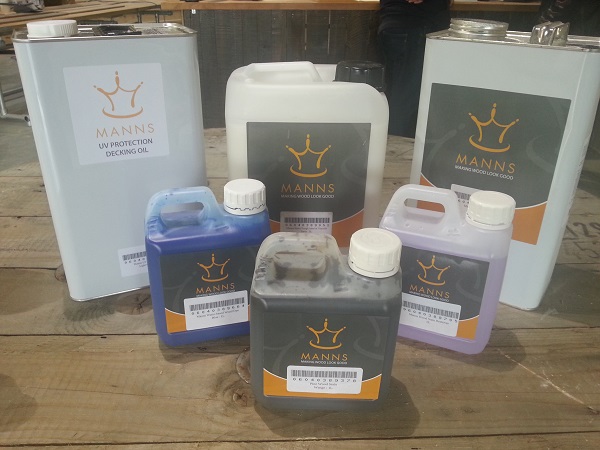 by 2012, just 5 years after the business went online, it was clear that the company had outgrown the barn. It was a bitter sweet decision because although the old barn was set in the beautiful Kentish countryside with views across fields and hills, during the high heat of summer, the tin roof turned some parts of the building into an oven and in the depths of winter, it was sometimes so cold that the fridge temperature was actually warmer than the office first thing in the morning. It was a common joke that we should leave the fridge door open to warm the office up. With joking aside, you knew it was cold when the office toilet and water in the kitchen taps froze. Needless to say constant measures had to be taken to protect the products from the heat and cold which was far from ideal.

In July 2013 the business moved from the picturesque farm to another type of farm, Park Farm Industrial estate in Folkestone, which was double the size at 3,700 square feet and just 2 minutes driving from the M20 motorway. Although the feeling was that our new location would see us good for a number of years, no one had predicted what was about to happen. 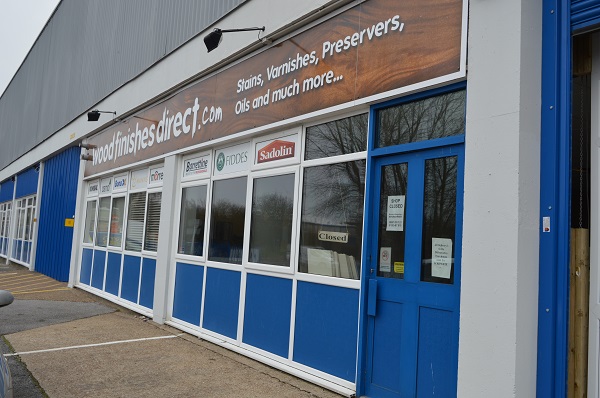 In part 2 of our Wood Finishes Direct story we’ll show you how things have developed at our new home in the short time that we’ve been here, share images from our 10th anniversary party and look at what we have planned for the future.

MONOPOLY puts Folkestone and Wood Finishes Direct on the map